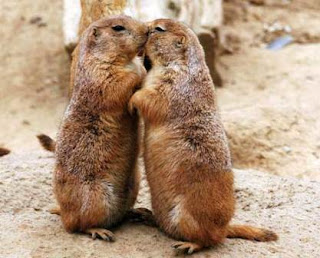 How would you like it if someone called you “my little lump of sugar”? And what would you think if, in a romantic voice, someone said to you: “diving fish, swooping geese”?

Well, depending on where you were in the world, you might just hear some of these very things! Terms of endearment vary hugely from country to country – so, whereas in one place you might be compared to a type of vegetable, in another you’ll probably be compared to a type of bird. And though in some instances romantic expressions come from ancient stories, in others they’re used simply because a certain something tastes nice! So, here are just some of the things you can expect to hear if you fall in love with someone whilst abroad:

In France, if someone falls in love with you they might choose to call you "mon petit chou”, “my little cabbage” or, alternatively, they could refer to you as “ma puce”, meaning “my flea”.

The Spanish, by contrast, display a sweeter tooth and will sometimes call the one they love their “terrón de azúcar”, their “lump of sugar”.

In Portugal, however, they’ll refer to their beloved as something that they absolutely cannot not live without - “meu coração”, “my heart”. Whilst in their former colony of Brazil, people will use “chuchuzinho” to express affection, which means something like “my little pumpkin”.

In Germany it’s quite different again. There, they’ll choose to elevate you to the heavens and call you their “Englein”, or “little angel”.

Italians, on the other hand, will demonstrate how truly rich they are to have you, naming you “tesoro mio”, “my treasure”.

In Russia though they will once more look up to the heavens for inspiration, calling you “golubchik" (голубчик) if you are a man, or “golubushka” (голубушка) if you are a woman, both meaning “little dove”.

Of course, you could end up falling in love with someone from a far more distant foreign land and, in that case, you should be prepared for everything to get significantly more exotic! For instance:

In Japan, a man will tell a woman he is in love with that she has “tamago gata no kao” (卵形の顔): “a face shaped like an egg”. This is a great compliment in Japan, where having an oval (egg-shaped) face is considered very attractive.

In Arabic, on the other hand, a beloved and beautiful woman can be described as “yoon al ghrazaali” (لك عيون الغزال), “having eyes like a gazelle”.

By contrast, the people of Thailand prefer to choose a quite different animal with which to compare their sweethearts, calling them “cháang nóoy” (ช้างน้อย) or “little elephant” – suggesting perhaps that they prefer their partners with a bit of meat on them.

And whilst in India people will describe the woman they love as being “mere dil ki rani” (मेरे दिल की रानी), “the queen of my heart”, Indonesians will choose something a touch juicer, naming their beloveds “buah hatiku”, “the fruit of my heart”.

But it is undoubtedly the Chinese who must take the prize for the most dramatic and interesting of romantic endearments. They win first place based on the story surrounding the greatest beauty in Chinese history, a woman named Xi Shi. It’s said that Xi Shi was so profoundly beautiful that when she looked at fish in a pond, the fish were so dazzled by her beauty that they forgot to swim and gradually sank deeper and deeper down, until eventually they had dived all the way to the bottom. Likewise, it was said that when geese flew overhead, they were so struck by her beauty that they would forget to flap their wings and so would end up swooping to the ground. Because of this, to this day, when a young Chinese man is in love with a Chinese woman, he may wish to tell her that, to him, she is as beautiful as Xi Shi. To do this, he will use just four words: “chén yú luò yàn” (沈魚落雁), which simply mean “diving fish, swooping geese.” 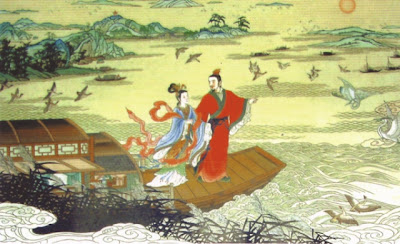